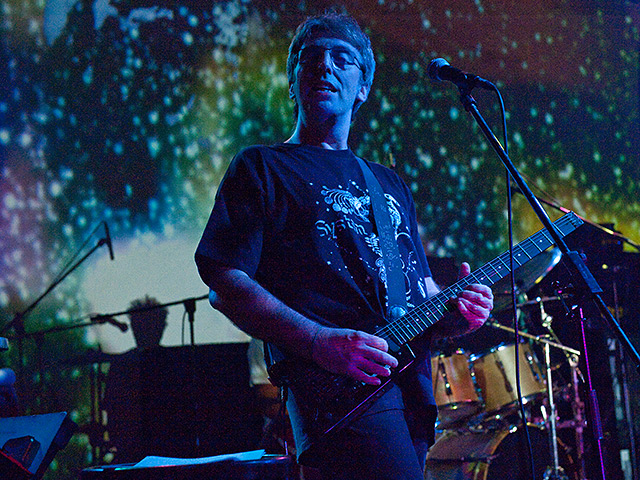 Steve and Miquette are currently considering a return to live shows with several offers made for System 7 this year, 2021. A decision will be made as the overall situation becomes clearer in the next few months.

SYSTEM 7 are enjoying a busy 2018, currently working on concluding their new studio album to be released on June 1st. The album is titled Cafa Seven and combines new System 7 tracks with tunes from their chill-out & downtempo sister project Mirror System.

System 7 playing various shows this summer, including two major events with Orbital in UK, and at Ozora Festival in Hungary. Also Steve Hillage is guesting on electric guitar for an orchestral version of Tubular Bells by David Bedford with the BBC Concert Orchestra in a public concert to celebrate David Bedfordâs 80th birthday at the Queen Elizabeth Hall on 12th June 2018, and guesting on guitar at a handful of Gong shows outside the UK, in Oslo and Canada.

Because of this summer's varied schedule, we are planning UK shows in October to promote the album. Please contact dan@vathq.co.uk.

VAT would like to congratulate Steve Hillage for winning the Prog Rock award for the best re issue of the year boxed set, âSearching for the Sparkâ album compilation. This documents Steve career to date from Gong onwards and is lovingly compiled with an amazing amount of detail about his career.

System 7 are beginning work on a new album which will be released in 2018.

Have had a wonderful year, highlights include an inspired album and tour with Japanese Jamm band ROVO, plus a great re mix release of their classic single over the years, previews at

System 7 have a twin album re release of their seminal albumsâ Fireâ and âWaterâ with many new mixes, on 4th October.

We are currently booking live shows in October and November and want to present a performance from both Mirror System and System 7.

If possible to secure a later curfew, finishing the night with a DJ set.

SYSTEM 7 are completing a recording project which is a collaboration with renowned Japanese band ROVO - the album, titled Phoenix Rising, will be released in September of this year, preceded by a single.

This project realises Steve Hillage's long held ambition to unite his strong elements of techno and dance with a brilliant band of skilled musicians, reminiscent in some respects to the Mahavishnu Orchestra with its blend of guitar and violin and intense passionate players. Certainly the same level of complete and authoritative musicianship is on display, but it adds elements of Japanese animee and projection in what promises to be a stunning live show.

PositiveNoise is collaboration between System 7 and British house music legend A Guy Called Gerald who now lives in Berlin, and is one of two tracks on the new System 7 UP album that they worked on together.